21 August 2020 Behind the scenes of GCSE results day in a pandemic: TES journalist reveals what really happened

Did the usual hugs and commiserations of GCSE results day take a back seat this year due owing the coronavirus? Joshua Lowe, a social media journalist at Tes, spent the day with students and staff at Rivers Academy West London to find out. 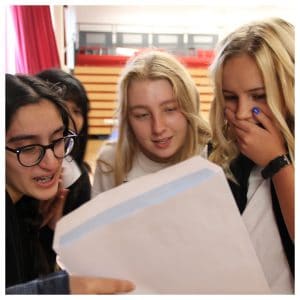 The coronavirus would have made GCSE results day a different beast all on its own – it didn’t need a chaotic six months of build-up to rob this Year 11 cohort of the usual experience of picking up their examination grades. But the government duly gave them the extra disruption anyway.

Even on my walk to Rivers Academy West London in Feltham on the morning of results day, there was still widespread confusion around what exactly students would be picking up or, in the case of BTEC students, whether they would be picking up anything at all.

If the staff at the school were concerned about the chaos or feeling the effects of months of disruption, they didn’t show it.

Andrea Singlehurst, principal at the school, who had invited me to observe a results day in the time of Covid, was relaxed and a picture of calm assurance.

“I’m just excited to see the students,” she told me.

This sentiment was echoed across the staff. For most, this would have been the first time they had seen their students in person since March. This was a cohort who had been robbed of most of the ceremonial events that mark the end of school – exams, proms, last days.

So rather than worrying about government U-turns, staff were mainly focusing on making the day as normal as it could be for the students involved. From social media posts, it seems this was the same in schools across the country: the focus was on the students, not the chaos they have been unwittingly exposed to.

How to run a Covid-safe GCSE results day

The image of results day is one of hugging – whether in celebration or commiseration – and large groups congregating in a packed school hall.

That was obviously an impossibility in the current climate. Instead, students were asked to come hourly in alphabetically ordered groups to minimise numbers.

They had hand sanitising stations and a one-way system, something that would have seemed incongruous even six months ago, but will be the norm from September.

The best-laid plans always go awry; while there was a concerted effort from staff to keep everything socially distanced, of course, there was an occasional hug between friends.

But the students seemed to respect their allocated hour-long slots and only forming in larger groups outside of school property.

Of course, results days don’t happen in a vacuum. Outside the walls of the school, students were reading about grade inflation and media commentators were questioning the validity of the results.

Did that have an impact as the envelopes were being opened?

For student Harpreet Haur, the answer is yes. She described a hollow sense that her grades hadn’t been earned.

It became apparent that teachers were keeping an ear out for this kind of self-deprecating talk.

As soon as Harpreet mentioned her doubts, assistant principal Sunita Khara swooped in with a reminder that her grades are an accumulation of five years’ hard work, not one missed exam and she had earned her results.

It’s reassurances like this that show the importance of teachers’ relationships with students. Because despite the fiasco surrounding the Department for Education, the flip-flopping of Ofqual, the barrage of news reports and the coronavirus, teachers will always endeavour to do their best for their students, as we’ve seen time after time over the past six months.