Helping children adjust to school post-lockdown has been a priority for teachers across the country.

However at Rivers Academy West London, the close proximity of Heathrow Airport and the impact the Covid crisis has had on local employment, has led to the creation of a unique system of support for students.

Tim Wormald, Wellness Lead at the Feltham school, is overseeing a year-long program of Transition Mentoring, a new measure designed especially for Rivers Academy students as they adapt to being back at school.

Explaining the ethos behind the initiative, he said: ”Some children have been very lucky and gone through lockdown in a luxury liner and others have gone along on a rickety boat and need a bit more help and support.

”Heathrow being closed down and the redundancies that have occurred and will occur along with the impact on the support industries, it has all had an impact.”

Speaking to Radio Jackie presenter Emily Dexter in a recent interview, Mr Wormald discussed the transition measures in place and why mentoring is key. 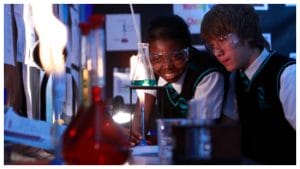 ”We’ve done a whole range of measures and our approach has been a whole academy approach. We have different entrances for different year groups and different timetables.

”The site is very different, there are two metres signs in place and a whole host of things to help the students return as well as learning and getting them back to school.

”What we’ve done differently this year, I suppose, is that we decided that we’re going to approach this from a more holistic perspective, looking at this as being a long term approach to their recovery. There will be issues with screen time, but we’re looking at things in stages. So in the beginning part, when they’re returning, we’re looking at making sure everyone feels safe in school and the students have come back really, really well.

”We’ve done some work with Student Voice [student group] and listened to what they have to say and they’ve been really pleased with that side of things.

”And we’re also trying to re-engage with their learning. When you spend a lot of time online learning, it’s very different and you can’t beat having someone in the classroom to teach you, there’s something very special about that.

”We’ve done quite a lot re-engaging the kids with their learning but aware that a lot of them have built up elements of anxiety during that time so we’ve been quite careful about overloading them when they come back.

”They’ve had support during the time that they were away but they may not have made that expected progress. So we’re assuming that when they come back that we will revisit some of the stuff that they done since then. It’s really an integrated approach and a stage-by-stage approach, and all the time listening to what the students are saying. Where we’re getting it right we continue, where we’re getting it wrong, we’re trying to tweak that and obviously working with all our staff across the academy.”

What is Transition Mentoring?

Providing a sense of belonging, making school fun and providing a teacher that students can confide in and talk to about their feelings, are all key to the success of Transition Mentoring.

Mr Wormald said: ”The Transition Mentor is in the school all day and they are there for the students. They have weekly contact time with them, sharing and listening to concerns that they have. And then provide them with guidance on how they might approach things more effectively in the future. Whether that might be about screen time, how they might cut that down, some of the effects of too much screen time, the impact on them and relate that to themselves.

”So it’s an opportunity for the students to get that proactive guidance so as you mentioned, we’re approaching this as a long term, so it’s not that we’re going to get them back in September and two weeks later once we’ve done a little bit of work with them they’ll be set and fine.

”They were desperate to come back and they were really pleased and those that have been in those kind of luxury liners are probably going to do a lot better. Some of the students concerns and mental health problems may not reveal themselves until a bit longer down the line so we are being proactive in looking for that and having one member of staff that is responsible for that group of students and having one member of staff who can get to know the students and the students can form a positive, adult relationship with is key to that. So we can have those deep and meaningful conversations and also the light-hearted ones, the ones that are so important for mental health.

”Everyone has someone they can turn to if they need to in school. It’s easy in big secondary schools for people to get lost and we certainly don’t want that to happen here.”

Appreciating the benefits of Transition Mentoring, Emily said: ”You [Tim] were saying the school is close to Heathrow and an awful lot of parents may be involved with Heathrow and the support industries. They may have had a more unstable lockdown and home life may have been quite chaotic for them and that emotionally available adult may not be there. But to have that space at school and to make it a fun learning environment. Really fantastic initiative, well done to you guys and I really hope that other schools in the area and nationally will take a leaf out of your book and do something similar.”

Your school has won an FFT National Attendance Award!

Bebras Challenge is a Computational thinking challenge organised every year by the University of Oxford. It’s a national level competition with more than 200000 students…